Sometimes, a monster movie is a slow reveal. Think Jaws and Alien, both movies where the big bad is as much menace as monster until the end. We only see the bitty bits until the third act. The limits of 1970s special effects did them both a real favor. And I just watched Pitch Black (HBO/Cinemax free preview weekend yay!) where the whole premise ensure you only see parts of the monsters at a time. (This is a really under appreciated movie, if you ask me.)

Of course, that requires your humans have to be at least as interesting as the monsters. The 2014 Godzilla movie was 80% darkness and fog and 20% visible monsters and zero percent characters I cared about.

Not a problem in Kong: Skull Island. For one thing, I liked the characters. (Well, the ones I was giving a chance to. The cast starts off much larger than it ends up.) But also? So much monsters fighting! In a monster movie! Go figure. High quality fight scenes, too.

The movie is set in the Vietnam era. I didn’t know that going in (though you’d think the movie poster would be a clue). Everything has a sweaty grittiness that looks like it smells like diesel fuel, gunpowder, and jungle rot. The vibe is very Apocalypse Now, and things seem to be headed in a Heart of Darkness direction (two characters are even named Conrad and Marlow).

John C. Reilly stole the movie with a castaway character that gives all the advice no one listens to. What is it with Reilly that I’m always like: Hey! I love that guy! But then I can never remember what he’s done. (Answer: everything.) (Ironically, the one I do always remember is that he was Amos Hart in Chicago, where he has a whole song about being forgettable.)

Samuel Jackson—this is no spoiler, since it’s clear from the first time you see him that he’s about one MF snake on his MF helicopter from snapping—is entertaining to watch unravel to full Captain Ahab.

OMG, Samuel Jackson as Captain Ahab. SOMEBODY MAKE THIS HAPPEN.

The others were likable and competent, which sounds like faint praise, but it’s a monster movie, so it’s not really. Brie Larson and Tom Hiddleston, to be fair, have the unenviable role of playing straight to Reilly, Jackson, and a giant ape. (Also, Captain Marvel and Loki!) 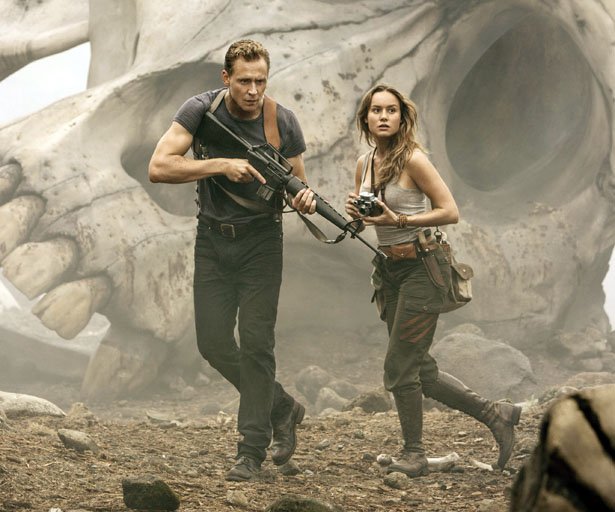 I liked the Vietnam War era setting as an aesthetic, and it gives a certain context to the military members of the expedition, most notably Colonel Packard (Jackson) but also his troops, who’ve been slogging through the moral morass of South Asia. There are a few clunker lines that try to draw parallels with war and aggression (Sometimes there’s no enemy until you go looking for one.) But it works best if you just let it be a movie about a giant ape protecting his island from the idiots who blundered onto it (and then from the monsters those idiots woke up).

Upshot: definitely a recommended rent. It may come to a streaming service fairly quickly, but I didn’t regret plunking down $5 to watch it in high def.